The Question of Funding: Yazan Khalili in documenta15

The Slow Work of Dialogue: An Interview with The Question of Funding

One of the lessons documenta fifteen might, despite itself, teach us this year, is that internationalism does not exist. Like the academic concept of interdisciplinarity, the international is a place of its own, even if it does not have a definitive location. It is a forum with its own particular values, theories, aesthetics and even language (English). Its cosmopolitan privilege makes communication that much easier, with consensus assumed at the onset. This year the quinquennial, curated by Indonesian collective ruangrupa, eschews a language of internationalism for the living, and necessarily slow, messiness of localities working side-by-side, agreeing and disagreeing, at times mis-communicating and becoming implicated in another locality, that of the post-WWII German context. Hito Steyerl elaborated on this topic in her June 3rd contribution to Zeit Online, “Kontext ist König, außer der deutsche,” in which she observed that in the politicised decision to embrace an international discourse, the German context has been neglected and even art-washed. This was only five days before she admitted to having “no faith in the organisation’s ability to mediate and translate complexity,” and withdrew from the exhibition.

One of the now on-going stream of controversies that influenced Steyerl’s decision was the 20-year-old painted protest banner from Indonesian collective Taring Padi, in which the artists failed to differentiate between antisemitic caricature and political satire, and which further complicated the explosive, poorly led debate. Before this particular controversy, it was The Question of Funding (QofF) that was attacked for its members’, specifically Yazan Khalili’s, positions on the BDS movement and ties to the Khalil Sakakini Cultural Centre in Ramallah, accusations which led to racially motivated attacks on the group’s contribution to documenta. These accusations, as well as their dubious source, have been well documented in the media since, and need not be unpacked here. What perhaps could be repeated, is a sentence from an open letter of the “GG 5.3 Initiative” written in 2019 in response to the German government’s official, if not legally binding, condemnation of the BDS movement as anti-semitic: “Germany’s historic responsibility should not be used to morally or politically delegitimise other historical experiences of violence and oppression.” The letter was signed by leading German institutions such as the Berliner Festspiele, DAAD, and the Centre for Research on Anti-Semitism at the Technische Universität in Berlin. It was later supported by a second letter signed by many leading international artists, many of whom live in Berlin.

Documenta’s question of “how do we work together?” has pressing relevance here, even if, or perhaps especially if, we are failing at answering it. In our interview, Yazan Khalili emphasised that “trust is based on disagreements rather than agreements”—a bit of wisdom that takes into account the necessarily slow process of dialogue. Though QofF do work comfortably in the international art world, for documenta fifteen, they have chosen to highlight what it means to make art locally in Palestine. To this end they curated the work of a collective of primarily local painters, narrated their history of funding, as well introduced the latest phase in a project for a supplementary economy mediated by the blockchain. The work shows that working locally is risky—the work does not always transfer to other contexts and aspects of it might prove myopic when showecased on a larger stage. In this interview I want to embrace Khalili’s notion of trust-building and use a moment of controversy to converse rather than to cut off dialogue. Here I talk to Yazan Khalili in Amsterdam and fellow QofF member and community organiser Amany Khalifa in Jerusalem.

Dagmara Genda: When I read the Eltiqa Collective’s story of funding, I was struck at how banal it is. It is a story of grants, tax difficulties, donations, etc.—everything that so many artists I know experience. So why show Eltiqa in this context?

Yazan Khalili: We wanted to show how this collective has managed to work for more than 20 years without becoming an NGO. Palestine in the last 30 years has been re-engineered to become totally dependent on international funding and the donor economy. This means that most organisations cannot receive funds without becoming an NGO. The drawbacks of NGOs is the expensive bureaucracy: the administration, the salaries, the dependence on international funds.

We also wanted to look at cultural practice as itself a resource that does not necessarily need financial support to exist. In this sense we are looking at Eltiqa’s workshops, how they make space for younger artists in a place like Gaza, which is a very extreme space in this world. So we were not only inviting them on their artistic work, that too, but also based on the structures that support the production of that work. 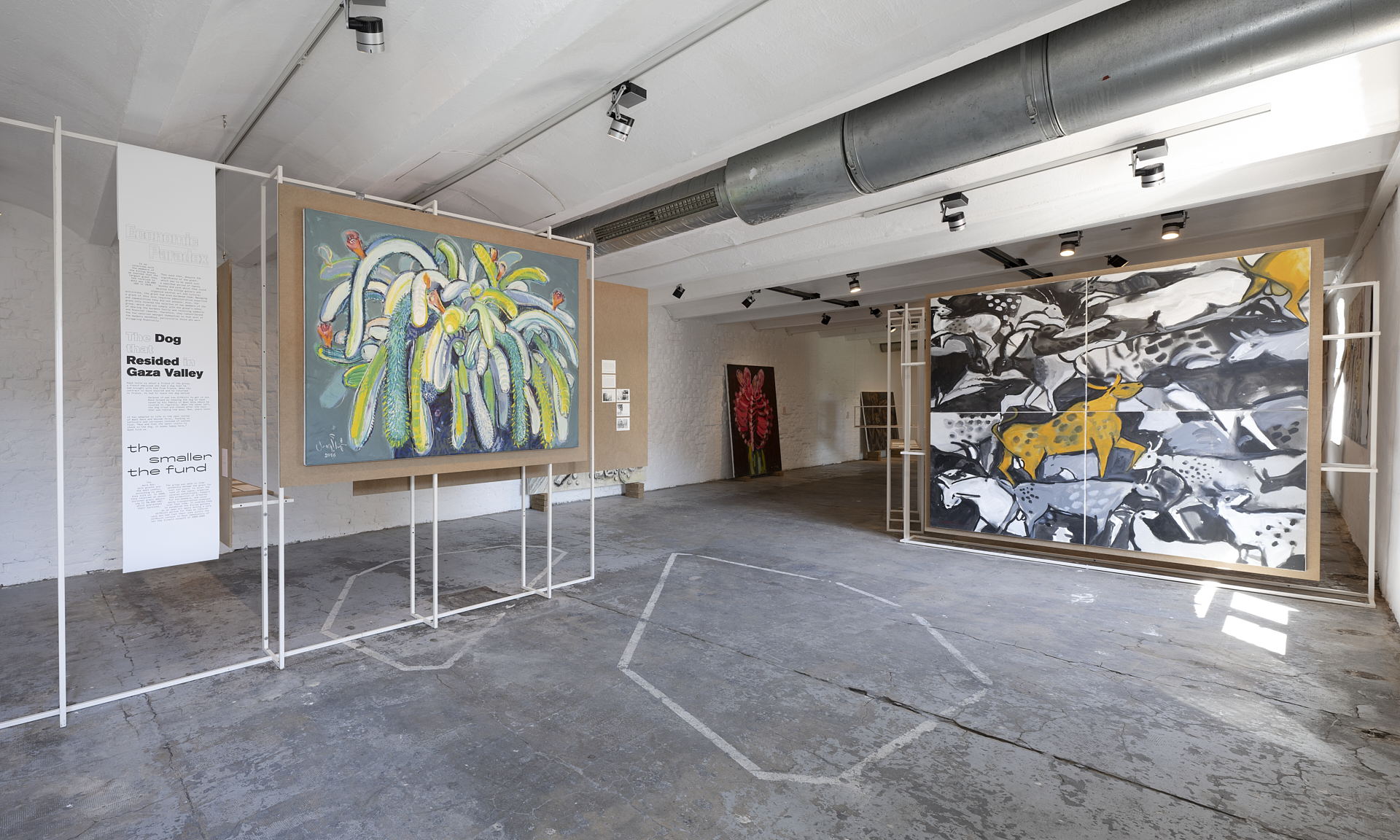 Amany Khalifa: Once you enter the domain of NGOs, you have to transform your practice as an artist or cultural practitioner. You lose the aspect of working together and instead are working for an audience and that audience is the external entity implementing its projects through very rigid structures.

DG: The collective has often bemoaned the fact that their work is considered through a political lens rather than for what it is: art. Do you know how they feel about your presentation of their practice through the lens of funding?

YK: I cannot answer this question on their behalf, though I think the media is generally interested in neither our research nor Eltiqa’s work. They reduce the project through the lens of one work, ‘Guernica Gaza.’ This means they are not even looking at the artwork nor engaging with it aesthetically or conceptually. Along similar lines our project is discussed only through the racist attacks and accusations of anti-semitism rather than the two and a half years of intensive work on economic structures, production of art, sharing resources, and the production of children’s books.

What is important for us is when you said you read the text on Eltiqa’s funding strategies, and you saw connections to your own experience as an artist. When we are looking at Palestine, we are simultaneously looking at Germany and elsewhere. Yet we are treated as if we come from Mars or Neptune. In the end, we also want to speak and show aspects of our culture and daily life, not just to be seen in the context of the Israeli-Palestine conflict. 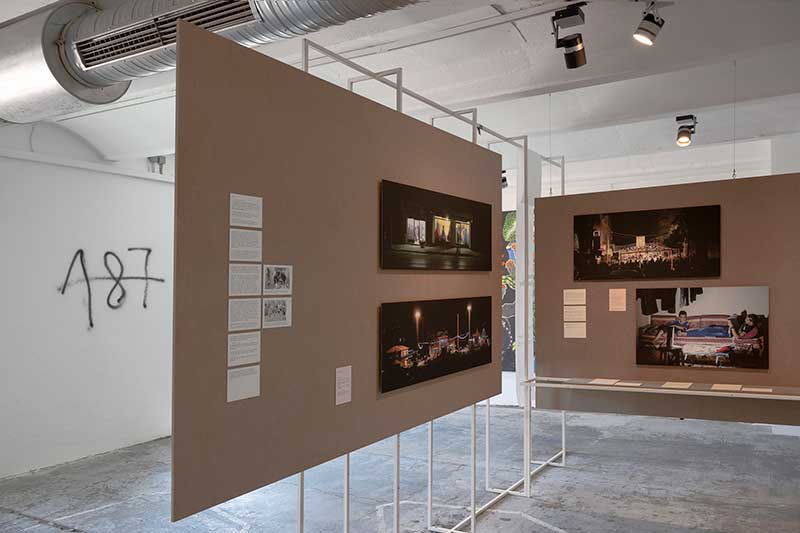 AK: We are rendered invisible except in the context of Israel-Palestine. We are not seen as active subjects outside of this conflict.

YK: It is as if we have no knowledge to offer. We are only allowed to learn.

DG: Can you talk a bit about the alternative economy you are proposing in your project for documenta fifteen?

YK: We have been working on this project before documenta. Dayra is the name for the blockchain technology project we are producing, but do not think of it as a currency or a coin—we are avoiding financial language. It is a medium through which exchange can take place, by minting and measuring communal resources.

It aims to create a supplementary economy that helps art and cultural practices to become independent, by becoming dependent on communal resources— equipment, space, knowledge, land, time—rather than state or international funding or philanthropy. The blockchain allows these resources to be measured and exchanged.

Money is a political tool that influences the type of art and culture produced. This doesn’t mean we are against funding. We just are against a mono-culture of support.

DG: So this is a version of a sharing economy mediated by the blockchain?

YK: We are definitely not reinventing the wheel here. We are just trying to create a medium that facilitates exchange while looking through the needs of our locality, which by definition, is also a universal lens. 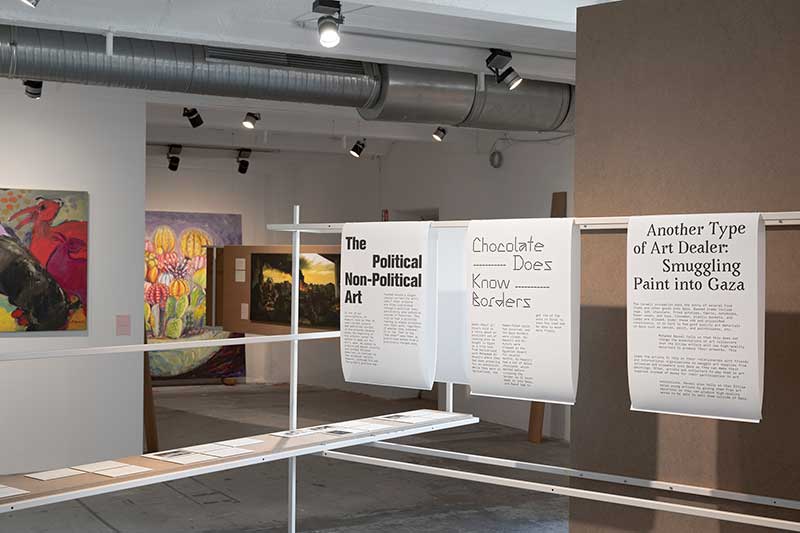 DG: The external challenges to funding in Palestine, like the inability to import certain things like art supplies, or the dependence on foreign money, are clearly portrayed in your installation. But are there any internal challenges within your own community that makes it difficult?

AK: We have held many community talks in which we have presented the Dayra. There have been many questions in relation to the value of the resources exchanged. Who will decide what the value is? What will be the products that will be circulated?

But the more talks we hold, the more people are starting to slowly understand the concept. They start to understand how value can be generated by the resources we already have and that this system is not competitive nor does it require that one have money to start.

DG: Could this also be implemented across borders?

YK: For now this is just a model through which Palestine can generate and keep its own wealth. In the future, there will hopefully be swapping pools, where people can exchange between communities. But the idea is not to extract the wealth of one community to bring it to another, but to keep, and also identify, the resources that we have. 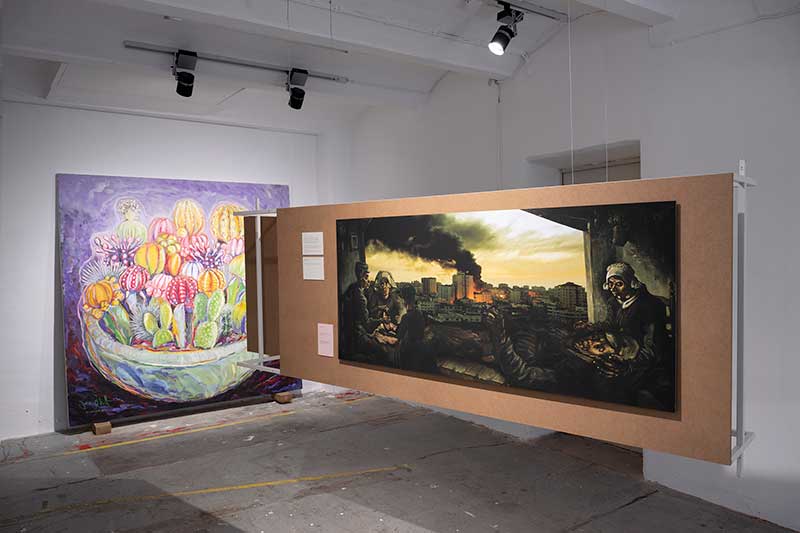 DG: How important are international, centralised events like documenta? Is the time for such events over?

AK: We need more concepts of lumbung that bring people together, that help us understand that we are in fact dealing with very similar questions, that these questions are not unique and do not only exist within our particular contexts. The last two years of zoom meetings have been incredible. The collectives are already thinking of the post-documenta moment. So we should keep doing this type of work, but I am not sure if it needs to happen at documenta and in Kassel.

DG: To me it seemed that documenta fifteen wasn’t first and foremost about art, but about models for building a new society.

AK: I don’t think it puts art aside, but it looks at art differently. It’s not that we do not want to produce art and just look at the infrastructure through which art is produced. When people say they do not see aesthetics at documenta, they are just not looking at collective work and processes, as opposed to looking at and judging a finished artwork. I think Gudskul, in Fredricianum, is an amazing work of art. 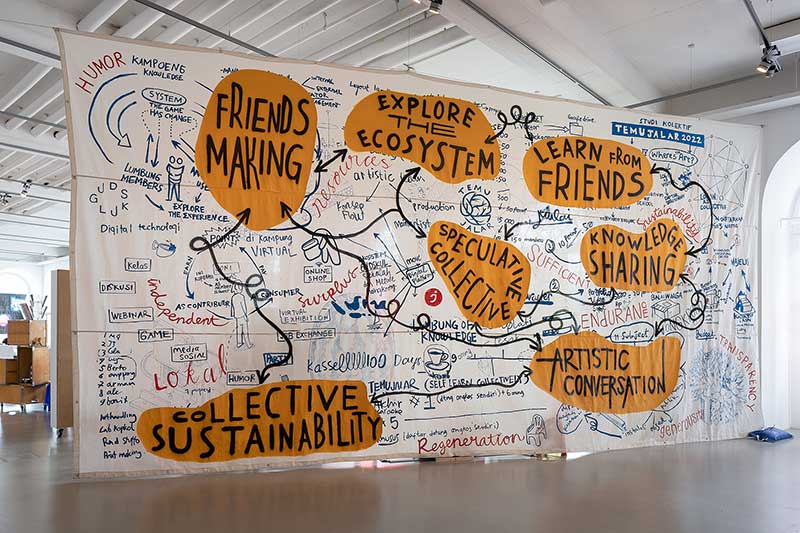 YK: When we say culture, we don’t mean only art. What I think we see in lumbung is everything that has to do with culture: painting, living spaces, and everything between them. The work of Gudskul and Jatiwangi Art Factory is so alive! It is a space of production, you can stay for hours. It is so different from these heavy, “grumpy,” Eurocentric practices. Because we have been so affected by European artistic practices, we forget that there is someone else producing something in a totally different structure, with playfulness and happiness. It is so nice to see it and to live it. 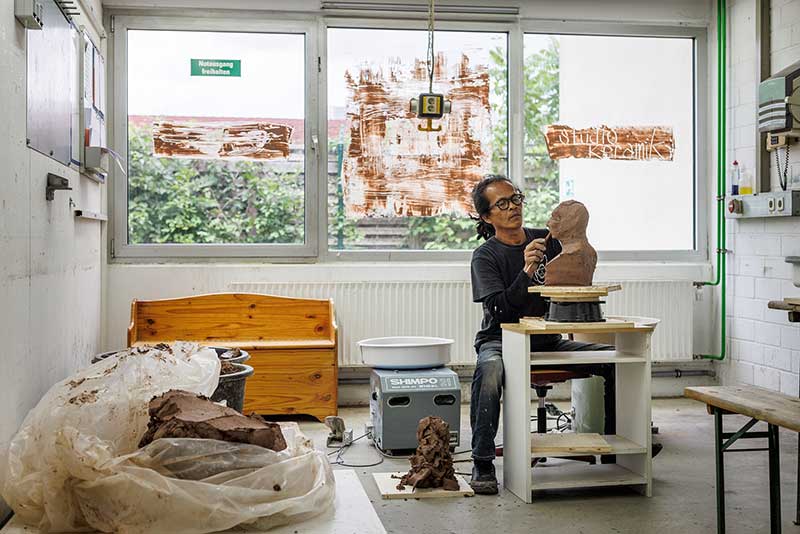 Leave a Reply Your email address will not be published. Required fields are marked *Comment *Name *Email *Website Save my name, email, and website in this browser for the next time I comment.one  ×    =  two

This site uses Akismet to reduce spam. Learn how your comment data is processed.