The antecedent of the exhibition is the screening series titled Fragments of Utopias, which was organized at the SYAA. By presenting several videos and documentary films, the screening series examined the failure of utopist beliefs in the development of society and science through architectural sites and ruins. The exhibition at Kisterem Gallery further deals with the relationship between architectural space and the human body and asks the question of why we are constantly turning towards the past so desperately when we want to achieve change. The works shown in the exhibition bring into daylight stories of underrepresented communities and ask questions about our future while turning towards the past. At the same time, they create new languages to talk about architectural space and the bodies trying to find their way in it. The term retro-utopia – according to Boris Buden – refers to the act of turning towards the future while making a detour across the past, examining its lost visions. However, the works exhibited here rather represent a certain kind of dilemma towards the fact that the belief in change has faded from the emancipatory and visionary utopias of the past and ask the question how we could within this new framework rethink the foundations of community and coexistence.

The works thematize such questions as what the relationship is between certain kinds of architectural spaces and the usage of those spaces by marginalized groups. How could a building which lost its function be reborn? How could certain spaces exclude and include communities at the same time? What are those bodily practices which are related to a certain kind of place? Through the stories of groups who are looking for their place within the context of the city, the works of Nikita Kadan, Tamás Kaszás and Anna Witt focus on topics of an aging society, climate change, and migration.

(The title is a quote from the poem Four Quartets by T.S. Eliot.) 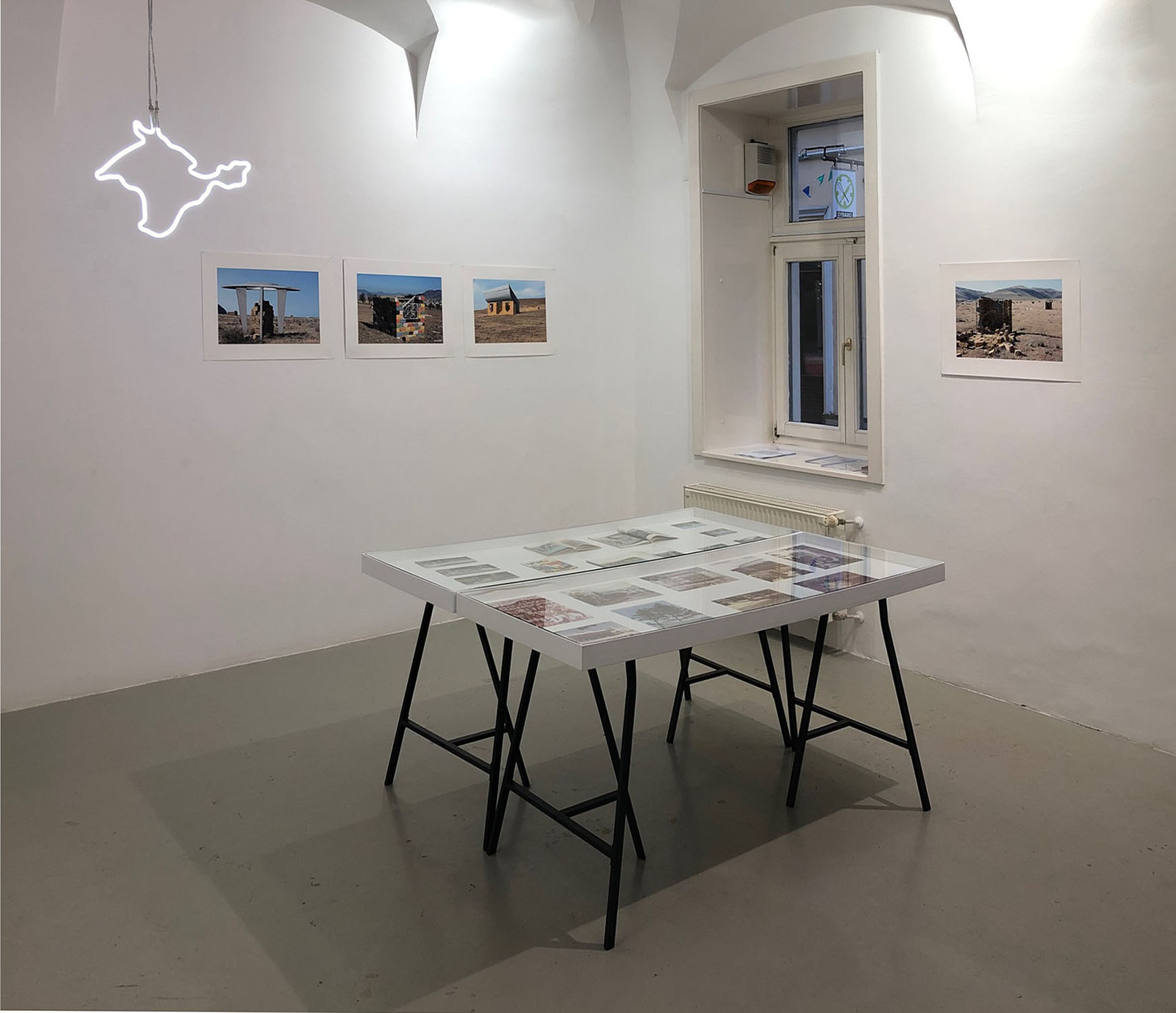 The work of Nikita Kadan (born 1982 in Kiev) centers on his artistic exploration of post-communist social and political developments, and their origins and causes in the Soviet system. Kadan produces drawings, paintings, and photography as well as objects, sculptures, and installations. The artist is a sensitive and critical observer and interpreter of historical shifts, and also of the connections and continuities between the communist past and turbo-capitalist present. He is a member of the artists’ group R.E.P. (Revolutionary Experimental Space) and co-founder of the activists’ group Hudrada. As an activist in the field of art and politics, Kadan also works with architects, sociologists, and human rights activists.

In his exhibition, the artist addresses the visibility and function of the artistic avant-garde in Ukraine within contemporary neoliberalism, which—in the conflict with Russia—is shaped by a politics based on military goals and an ideology of anti-solidarity in the fabric of society.

A traditional showcase, in its form and material referring to showcases from the Soviet Union, accumulates materials that Nikita Kadan has collected in eastern Ukraine during the war. The rubble inside reveals political narratives with a striking truthfulness: these destroyed artefacts are containers of words, of images and memories that narrate a (present) history. Thus the sculpture deals with the institutionalization of memories, the role of local heritage in forming a historical understanding against the cultural amnesia resulting from the conflicts. The showcase itself, in opposition to the rubble it collects, addresses Ukraine’s Soviet past, a part of history that is rather readily forgotten. It places the current conflict in a historical framework and presents the war as an extension of an established conflict of ideologies.
In between the rubble, inside the showcase, grows a bean plant that over time will cover the destroyed artefacts. It transforms the sculpture into a greenhouse, referring to popular gardens that appeared throughout the conflict, starting on the occupation of Maidan Square and continuing to the warzone in Dombass. These gardens suggest hope, a new start, a future life and process of reconciliation.
“The allegorical character of Hope is traditionally called upon by shipwreck victims, those who are completely at the mercy of external forces. It is easy to make profound generalizations about it for those who are safe on the shore. And it is impossible to describe his situation to the one who is being played by the waves. The experience of a pure, all-encompassing hope, which has replaced everything else, must remain untold. It often appears as an aid, an excuse for leaving loopholes, for thoughtlessness and for not pursuing a matter. We should talk about hope only if we need to exhaust it, to step over it as if it was a threshold, to be on the other side of it. Only then we can calmly walk on the burning ground, smiling and taking full responsibility for our choices.”

“The incandescent rays of light in Private Suns by Nikita Kadan reflects an aura of freedom – which is increasingly being reduced in public space – from a private space. The visitors remain outside the utopian horizons created by the shining image of the neon suns of a post-socialist metal grid, where others (artists?) have sought to find a new dimension. The grid is only effective as a formal and ideological tool when it is not perceived as an escapist structure.”

Nikita Kadan (°1982, KYIV) lives in Kyiv. He graduated in 2007 from the National Academy of Fine Art (Kyiv) where he studied on the department of monumental painting under professor Mykola Storozhenko. Since 2004 Nikita Kadan is a member of R.E.P. (Revolutionary experimental space) artists group.
He is co-founder (2008) and a member of HUDRADA (Artistic committee) curatorial and activist group. Kadan works with installation, graphics, painting, mural drawings, posters in the city, often in (interdisciplinary) collaboration – with architects, human rights watch activists and sociologysts.

Kadan often uses the style typical for drawings taken from Soviet medical books. They represent “bodies-objects”, “obedient bodies” from Foucault which can be corrected and improved while their faces always remain calm and quiet, slightly smiling.

The issue of torture is very important for Kadan: starting from the “direct” torture used by the Ukrainian militia (police) to the “hidden torture” such as standing all day long and selling food in the street in winter – elderly women working like this constitute a typical element of the Kiev cityscape. Architecture is another important topic of Kadan’s works in which it is treated as a discipline tool, spatial manifestation of the authority.

The works “Fixing” (2010) and “The Corrupted” (2012) focus on the relations between the body and the city – when certain directions of the city development turn against its inhabitants, their social relations and everyday life, as well as against the body of the individual human being. Fixing is comprised of five lightboxes with images combining medical drawings from the medical encyclopaedia of the 1950s with “supremacist” forms of architectural planning. The city plan turns into an instrument for violent fixing of the citizen’s body. “The Corrupted” constitutes a cycle of watercolour drawings combining architectural elements with human body parts. These architectural-anatomical combinations refer to the Renaissance concept of the anthropomorphic city. The work focuses on the problems of the contemporary post-communist cities in which public space suffers due to aggressive neoliberalism. “The body of the city” is cut to pieces offered for sale.
“Procedure room” (2009-2010) is a set of souvenir plates with imprinted instruction drawings of tortures used by the militia. The selection of forms and visual means is connected with the absence of any clear visual documentation of torture procedures, with their specific “invisibility”.

“Pedestal. Practice of exclusion” installation (2009-2011) consists of o huge model of pedestal and a text on the wall. This white gypsum-cardboard pedestal stands in the exhibition hall touching the ceiling, leaving no place for the monument. The space for the viewer to pass around the pedestal is narrow. White text on pale grey wall is a chronicle of a “war of the monuments” in post-Soviet Ukraine: vandalizing both Soviet and new national-patriotic monuments.

“Small house of giants” (2012) is a combined object, kind of architectural collage, which’s parts are living container for builders from 1970s and a model of facade of geometric form referring to Soviet neo-modernist architecture of the same period. “Small house of giants” is a reflection on the shifting social role of the worker within the new capitalist environment in Ukraine. On the other hand this object opens a critical discourse on the fictive heroical position that workers held in the Soviet past.